Engel & Völkers North America is led by real estate’s most experienced and proven management team. They are leaders and executives of the industry’s most widely recognized brands who are now proving themselves as innovators and visionaries. They are successfully growing the Engel & Völkers name in North America, and, as a result, redefining and raising the bar for client-focused real estate service. 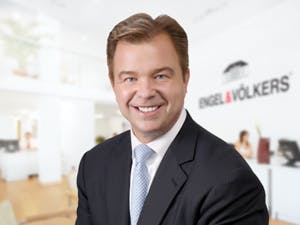 Anthony was a top-producing agent who was continually acknowledged for his business acumen and commitment to customer satisfaction by publications such as The Wall Street Journal and Los Angeles Times. Drawing from his experience—and from his success managing his own record-setting team of 12 real estate professionals under the Anthony Hitt banner—Anthony established a training course for other agents to raise the bar for superior performance in the industry.

Anthony pursued the same objectives upon joining Engel & Völkers, where his management and training initiatives provided an extraordinary level of support for the brand’s license partners and brokerages, allowing them to attract top agents to their teams and raising the interest of the most discerning real estate consumers.

Prior to joining Engel & Völkers, Anthony worked with Sotheby’s International Realty® in Los Angeles for eight years and closed approximately 400 real estate sales transactions amounting to nearly half a billion dollars. Los Angeles Magazine named Anthony one of the city’s “Super Agents,” and Los Angeles Business Journal awarded him as their first and only “Green Agent of the Year.” Since becoming CEO, he has been ranked in the Swanepoel “Top 200 Most Powerful People in Residential Real Estate” in 2016 and 2017 and included in Inman’s “The Real Estate Influencers List” in 2017.

Anthony credits his business and real estate success to his philosophy of providing exceptionally personal customer service and constantly implementing the most up-to-date systems for efficiency and comprehensive service. He has authored several books to share his advice for success in business and in life with others, including Essentials of Personal Achievement, Taking Charge and Positive Impressions.

Although Anthony hangs his hat in New York City, you can likely find him in the air traveling between Europe, the west coast of the U.S. and Hawaii, too. Anthony has a soft spot for sunny California after having spent countless hours there, first developing his budding real estate career largely in Santa Monica and Malibu. He also attributes his upbringing to Moberly where his life began, a modest town in central Missouri. 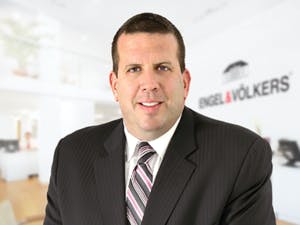 Jim joined Engel & Völkers with more than 20 years of sales, operations and management experience in a variety of industries. In real estate, having managed the operations and growth of CENTURY 21® Real Estate and Better Homes and Gardens Real Estate®, Jim created a long, successful track record for himself after establishing these brands. Before entering real estate, Jim’s extensive experience in sales, marketing and chain account positions began with Diageo, the world’s largest wine and spirits supplier.

In the span of his entire career, Jim has been transferred to or lived in New Jersey, Boston, Washington D.C, Atlanta, Dallas, Las Vegas, Chicago, Newport Beach and Miami—but his heart will always be in New York. Jim was born in Queens, grew up on Long Island, spent his undergrad/graduate years in Cortland and Syracuse and is back full circle on Long Island where he resides with his family. 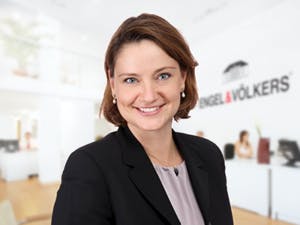 As Chief Financial Officer, Ulrike is responsible for the company’s finance, accounting and treasury functions. She also oversees human resources and all legal matters for Engel & Völkers North America.

Prior to joining Engel & Völkers, Ulrike served as Vice President Operations, Foreign Subsidiaries for the software company OneVision, where she was responsible for the establishment and operations of subsidiaries in the United States, United Kingdom, France and Brazil.

Ulrike was born and raised in Germany, having spent most of her time in Potsdam and Augsburg, before finding herself in different parts of the U.S.—namely Atlanta, Georgia; Portland, Maine; and Sacramento, California. Before nesting in Manhattan’s Upper East Side where she currently resides, Ulrike also spent a short time in Regensburg, Germany and Jersey City, New Jersey. 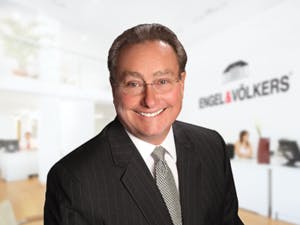 As the former President & CEO of CENTURY 21® Real Estate, Tom led all aspects of brokerage and franchise operations and headed the company’s growth strategy worldwide. With over 30 years of franchising experience and as one of the original members who developed Realogy Corporation’s franchise sales tools, Tom is a respected industry expert in franchise sales, regional development, system-wide recruiting, systems implementation and broker automation. Prior to this, Tom led one of the CENTURY 21’s largest real estate brokerages totaling 13 offices and 750 sales associates and employees across California, which, in one year alone generated more than $2.2 billion in closed sales volume and $62 million in adjusted gross commissions.

Tom’s early leadership in the technology and employment sectors preceded and bolstered his pioneering leadership in the real estate industry, during which he also served as Senior Vice President at Cendant Corporation and was responsible for real estate franchise sales efforts in the western region of the United States for the brands CENTURY 21, Coldwell Banker®, Coldwell Banker Commercial® and ERA®.

Tom is the co-author of Community & Business Partnerships, which illustrates the mutually beneficial synergy between non-profits and corporations.

Tom is considered a man of California, but a transplant from Utah. He also served in the U.S. Army in Vietnam. 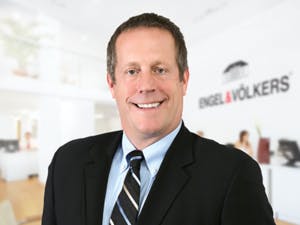 Jacob Stepan is responsible for the brand’s continued strategic and targeted growth strategy.

Under Jacob’s leadership, Engel & Völkers has seen significant growth in existing markets across the U.S., Canada and Mexico and has accelerated growth in key metro and resort markets. Identifying the most qualified candidates to represent Engel & Völkers’ storied brand, Jacob and his team are responsible for bringing new franchisees to the Engel & Völkers network and continue to exponentially increase the network’s number of brokerages.

Having spent valuable time in Seattle and Hawaii, Jacob is a friend to Pacific Time. Jacob was born and mostly raised in Seattle (“Go Seahawks!”), after which he moved to Hawaii, Washington D.C. and Orlando. Jacob and his family now call Randolph, New Jersey home. 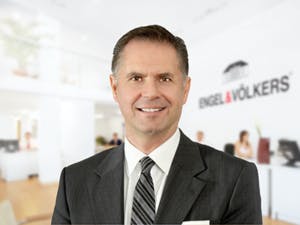 Richard’s highly successful career includes respected industry franchise executive, Realtor, real estate developer and entrepreneur. With over 35 years of marketing, sales and franchising experience, his understanding of franchise operations combined with his experience as a top-producing realtor and brokerage owner have helped develop brands such as the Sutton Group in Canada and the selling of numerous properties and businesses across the U.S., Canada, Mexico and Costa Rica.

A manifestation of his business acumen, Richard has also co-authored The Business Valuation Book and has been a regular source for real estate market expertise in The Wall Street Journal and REM Magazine based in Canada.

Born in London, England, Richard moved to Toronto, Ontario at a young age and bid the Queen adieu. Before permanently settling in Toronto, Richard has also lived in Florida, Mexico and Costa Rica. 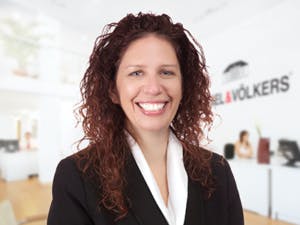 Jill DeSilva is responsible for Engel & Völkers’ strategic positioning, awareness and product and service offerings in North America. Jill’s leadership is instrumental in marketing Engel & Völkers in North America, as she is responsible for maintaining and strengthening the brand’s esteemed reputation and story to continue to gain awareness throughout the U.S., Canada, Mexico, the Caribbean and Central America.

Previously, Jill was the Vice President and Director of Marketing for Sotheby’s International Realty® in Westchester, New York where she was responsible for marketing activities between local and corporate offices, organized networking events, implemented training courses and consulted on new real estate technologies and marketing strategies.

Born and raised in Tappan, New York, Jill is also raising her family here after having bounced around several places in the Northeast of the U.S. 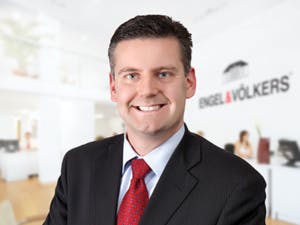 Prior to joining Engel & Völkers, Peter was a member of the strategic growth team at CENTURY 21® Real Estate for more than 10 years. During that time, he supported the development of the “C21 New Growth Platform,” which provided offices with resources and guidance regarding relocation and affinity partnerships. Peter also led the redevelopment and redeployment of the Franchisee Onboarding Process for the opening of new office locations, in addition to consulting with existing offices on mergers and acquisitions.

Peter is a true Northeasterner: born in Queens, New York; growing up in New Jersey; graduating college in Boston; and working in New York City. Peter now lives in Manhattan’s Upper East Side, but enjoys weekends spent in Montauk, too. 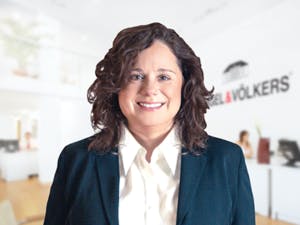 Sharon Delaney’s background in real estate marketing and training is invaluable in her role as Senior Vice President, Academy for Engel & Völkers North America, where she creates and heads all learning programs for the network’s license partners and advisors. Sharon also leads the brand’s cause-marketing partnership with Special Olympics.

Throughout her more than decade-long experience in real estate training, Sharon has designed messaging and job training programs for numerous international companies and coached thousands of individuals to create highly experienced and successful networks.

Before Engel & Völkers, Sharon’s luxury real estate experience began with her tenure as Vice President of Coldwell Banker Previews International® — supporting its global launch and branding in addition to product development and marketing on regional levels. She also provided marketing consultation, system tools and product training to thousands of brokers and real estate agents as Director of Regional Marketing at CENTURY 21® Real Estate and spearheaded her own marketing consulting group, Delaney CMO.

Sharon holds a B.A. in Communications and a M.A. in Vocational Counseling and is a certified Infinite Possibilities® Trainer.

Sharon may have grown up in the Green Mountain State, but she’s always gravitated towards the water. After living on the shores of Lake Michigan, Lake Champlain, Cape Cod and Old Orchard Beach, she now lives in her beloved Rye near Jenness Beach.